Construction took longer than anticipated, the clients were ecstatic, and the builder did a wonderful job. A shot from the front of the house will be added soon.

Posted by Shane O'Brien b.arch raia at 6:49 PM No comments:

Attention to detail; that's just something I do. The way materials and spaces come together is the stuff that makes architecture. Not trying to be tricky, but being intentional about the way they come together. 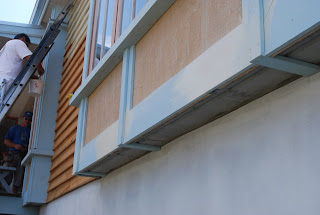 The built form to bed 1 is expressed as a verandah element, primarily to mitigate impact to neighbour's views. The facade treatment respects this difference, plus acknowledges the way that old houses typically possess ad-hoc additions and treatments. 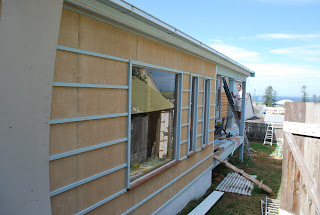 Good decks are very important spaces. Semi-private/semi-public, indoor/outdoor spaces, if they're done properly. Great spaces to congregate when the weather permits. A bit of a barrier to the outside world. This deck will have retractable fabric roofing to extend its use. 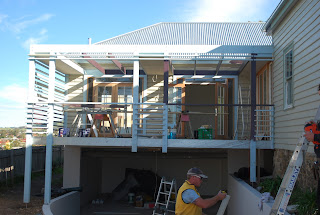 The deck is critical in highlighting, sympathetically, the difference between new and old; the modern, versatile, utilitarian, entertaining deck and the traditional bull-nosed verandah. 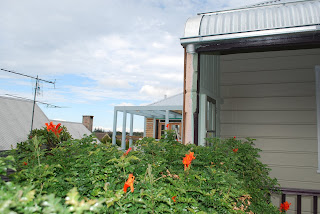 Behind the scenes, there is the laundry chute - its opening seen in this shot. In the wall beside it there is a passive ventilation shaft, continuously drawing air from the basement laundry, to keep the room fresh. Also, we had the linen cupboard on this floor fitted out to potentially have it become the laundry should the stairs became too much in latter years. 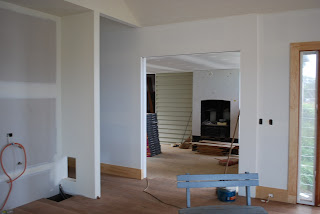 Posted by Shane O'Brien b.arch raia at 6:17 PM No comments:

Articulation of the building edge resulted in a series of spaces possessing both function and delight. The deep sills to the living room window bays serve as long seats; the multiple windows can be opened to optimise sea breeze cross flow. 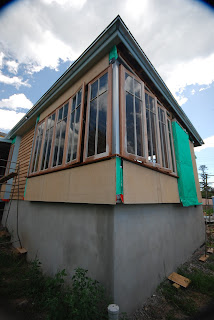 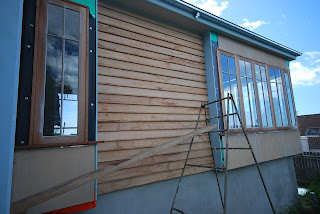 In bed 1, the deep reveals are intended to serve as bay seat and as shelving, the ceiling possesses a circular cutout to relieve the low space. 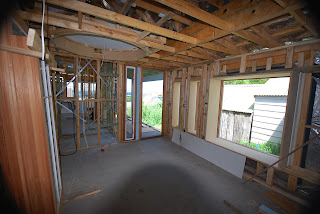 The breezeway, linking old and new, begins to take shape. Galvanised iron and timber shiplap were selected to respect the heritage precinct and to unite the building; an issue held dear by the clients.. 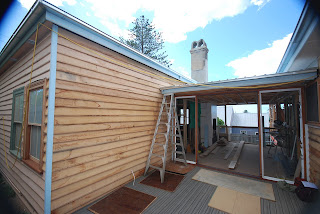 Although two storey in height, the scale and mass of the additions remain consistent with neighbouring development. 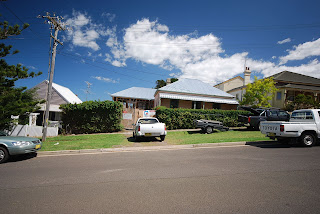 Posted by Shane O'Brien b.arch raia at 3:43 PM No comments:

Out of the ground

The weather was kind, and the concrete block basement came quite quickly into being. There were few surprises found in the old cottage, being in quite good condition for its age.

The existing wood stove fireplace was proposed to be retained for use in a breezeway; intended to connect new and old. The additions are sited to take advantage of existing views to the ocean; and to avoid overlooking neighbours. 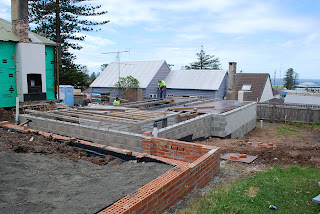 The lofty ceilings of the living spaces start to be defined; as are the large openings from living and master bed, orienting toward ocean views. 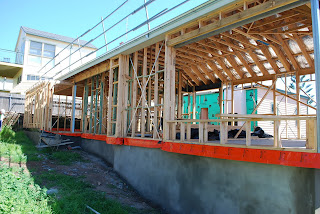 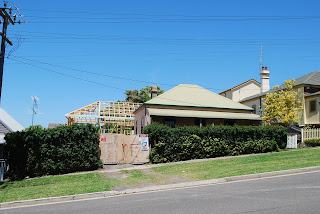 Posted by Shane O'Brien b.arch raia at 7:39 PM No comments:

Design of the house required partial demolition of the cottage, inclusive of four ad-hoc rooms to the rear, resulting in retention of the four-roomed layout typical of the period.

The aim was to locate visitor accommodation in the existing cottage and to link this to the new 'cottage' to the rear, enabling a variety of spaces to be opened or closed dependant on the amount of resident occupants. 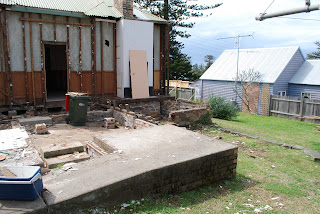 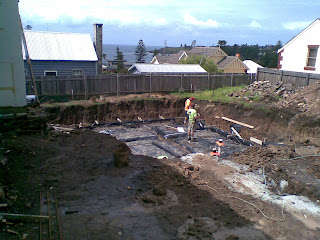 The benefits of the living spaces being located to the rear were inclusive of optimisation of views, enhanced privacy, and a reduced building footprint through vehicles being located in basement parking.

A great deal of care was given to the existing cottage, inclusive of stripping it of internal linings, insulating the walls and ceilings, re-roofing, re-wiring, freshly plumbing the new wet areas, and restoring the facade, windows and doors. 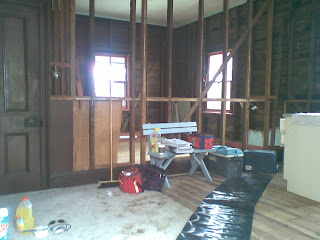 Posted by Shane O'Brien b.arch raia at 7:14 PM No comments:

This was to be the second house I had designed for a charming, retired couple from Sydney. The first was large, contemporary, ocean front. This one was extensions to a quaint timber cottage on a site in Kiama: well positioned; ocean views; sea breezes...dreamed about by the clients for many years.

I met with them to talk over initial concepts, then everything came to a halt; the house next door became available!

After so much emotional commitment, the deal to purchase the new and discard the old happened surprisingly quickly. We were now talking about substantial alterations and additions to a house on a site twice the size. 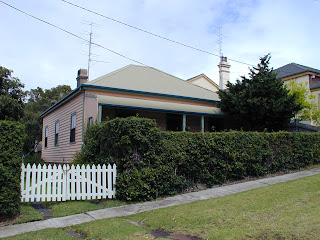 The brief was for flexibility in accommodating two or many; ample space for entertaining; retain the charm of the existing heritage cottage; exploit the ocean views; respect the neighbours; realise a dream... 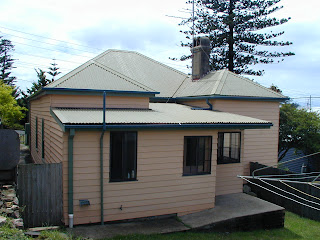 Posted by Shane O'Brien b.arch raia at 1:23 AM No comments: